Ganoderma Lucidum … the elixir of longevity

Presentation:
Ganoderma Lucidum (Reishi in Japan and Lingzhi in China) is a mushroom used for over 4,000 years in traditional Chinese medicine as one of the most powerful remedies of antiquity. Its rarity and exceptional virtues have given it a reputation and priceless and its use was reserved for emperors and nobles of the time. Powerful revitalizing, detoxifying, adaptogenic and regenerative therapeutic virtues are unequivocal. Its energizing action on the liver and lungs, giving it a specificity in the therapy of chronic diseases in general, and in particular hepatic and respiratory system.
Origin:
The Ganoderma Lucidum has its origins in over 4,000 years in Asia and particularly in China and Japan where it was used as anti-aging remedy and as elixir of life. Relatively rare old time, and pushing mainly in the mountains, it was reserved for an elite, namely the emperors and some of the most powerful personalities of the Asian world. Currently it is grown heavily in China and Japan and is still used in Chinese medicine, but also in the manufacture of several drugs, antioxidants and dietary supplements.

Composition:
Ganoderma Lucidum contains over 200 active ingredients, mainly antioxidants. Unlike most other medicinal plants, these antioxidants are not vitamins or minerals normally found in the daily diet, but instead these active ingredients found in Ganoderma are specific to the fungus and is very rare to see such a concentration as powerful and effective active ingredients in a single element.
Its main composition is shared between polysaccharides and triterpenes. Among triterpenes, which are necessary for the regeneration of healthy new cells, we can find: glycoproteins, acid b-D-Glucaniques, of hétéroglucides as D-mannose, D-glucuronic acid, D-Xylose. Triterpenes are also present in large quantities in the Ganoderma Lucidum, one example is: the lanostanes like ganoderic acids, and also ganolucidiques the lucidiniques. It also contains molecules of 7-hydroxystérols and many little known elements and others not analyzed this day.
Medicinal properties:
The Ganoderma Lucidum is a first class plant, very powerful antioxidant, major revitalizing, elixir of life, anti-aging, and especially a major adaptogen, it enables rapid remission of the disease and convalescence periods. It supports the body as a whole and not one or more specific functions. In traditional Chinese medicine this mushroom is part of the famous Imperial Trio: Ganoderma, Ginseng, Cordyceps, highly prized by Chinese medicine therapists.
It can treat among others: the loss of vitality, fatigue, stimulates and strengthens the adrenal glands, provides better resistance to extreme temperatures, and is considered as an anticancer, and tonic (but not a stimulant!).
Its action on the immune system is undeniable, and the strengthening of immunity is part of the main virtues of Ganoderma Lucidum that is why it is considered as natural antibiotic, antibacterial and antiviral. Stimulation of excretory functions and detoxifying the body from heavy metals, pollutants and aggressive and synthetic agents confer to it antioxidant and detoxifying properties. It also allows the prevention of ORL and lung diseases (influenza, colds, sore throats, bronchitis, pharyngitis … etc.). It can also treat certain diseases such as fibromyalgia, mononucleosis, AIDS, and all forms of allergy. Its preventive action against autoimmune diseases, leukemia and certain forms of cancer has also been proved by modern medicine. This mushroom is also known for his support to the liver, great purifier of the organism. In fact, the liver is the main organ of the biochemical and metabolic transformations which allows the adaptation of the body to all types of weather or metabolic stress. Ganoderma Lucidum by its adaptogenic properties permits optimum functioning of the liver and therefore of all the body’s metabolism.

Preparation:
It is known that Ganoderma Lucidum red is more bitter than black, so its preparation differs according to his taste. their marketable forms are either in small pieces or powder. The best preparation is the dissolution of its powder in boiled water which would corresponds to the Ganoderma Lucidum tea or small pieces also in boiled water which corresponds generally to herbal infusion of Ganoderma Lucidum. The preparation in the form of decoction can also be made to prepare an extract of Ganoderma Lucidum. One can also consume it in soups, however, the more its taste is bitter, the less it is best to consume it in soups and better it would be wise to mixe it with other synergistic herbs to soften its taste.
Although powder forms and pieces are most available on the market, it can also be found in its raw form, that is to say, in full slices of mushroom and most often they are dried. This shape has the disadvantage of being very difficult to break into small pieces and even less crush powder. So the best way would be to put each slice in a water container.
When using Ganoderma Lucidum pieces or complete slices, it is important to boil water with the mushroom for two hours. Allow it to cool, and if the extract is still too bitter and colorful, you can still renew the operation. You can mix the extract obtained with green tea, juice or other drink (excluding alcoholic cocktails) to soften the taste.

Dosage:
The average daily dose is between 2g and 7g. We note 12g as maximum dose for a powerful human body having healthy emunctories. 12g is a very high dose and is certainly not suitable for many people especially for those with weak constitutions. It is recommended to start with a minimum dose of 2g per day, or even 1 g per day and to increase the dose progressively as we can observe the intensity of the effects caused by this dose. It is always advisable to remain in the range of 2g-7g and not exceed 7g without medical supervision. A cure for Ganoderma Lucidum lasts, in general, not less than a week and no more than three weeks. It must be emphasized that the dosage and duration of therapy vary considerably depending on the constitution and the weaknesses and strength of the metabolism. It is therefore essential to gradually go and seek medical advice if necessary.
Side effects: 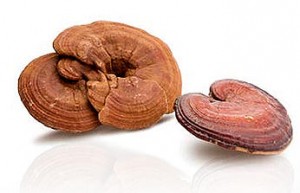 Side effects due to Ganoderma Lucidum intake are quite numerous and vary from one individual to another. The Ganoderma Lucidum has an effect on the entire body and side effects appear depending to the weaknesses and flaws of each metabolism and therefore it is difficult to make an exhaustive list of these side effects. It belongs to everyone to observe and identify these effects according to its own constitution, preferably with a doctor or therapist who has experience in the use of this substance. However it obligatory to consult a doctor if pain is identified in a specific organ or, in case of disorders heart rythm. In all cases, it is important to never exceed the twenty days of regular and continues Ganoderma Lucidum intake. It is always recommended to make a break of at least a month to give time to the body to undertake the detoxifying and adaptation actions and not cause an overload of active ingredients that could generate very undesirable effects over the medium term.
As a potent regenerator and cleaner of the body, Ganoderma Lucidum may cause fairly aggressive detoxification reactions for low body constitutions. The Ganoderma Lucidum may not be appropriate for some individuals and in some cases cause non-tolerable side effects, it is recommended in this case to use other plants with similar effects which are better adapted to the metabolism of these persons. Allergic reactions and indigestion due to Ganoderma Lucidum are very rare but they can occur in certain types of people, so be careful with the doses used in the beginning.